“The West Lancs Triathlon is one of the earliest triathlons in the area and the impressive, modern campus of Edge Hill University was a great location to kick off my 2018 multisport season. I recently returned from a week-long warm weather training camp in Mallorca with Racepace where I was able to get some good sessions in across all three disciplines as well as put my Arena Carbon Triathlon.

Wetsuit to the test. Back in the UK and with some specific sessions for this event completed I was raring to go!

With it being a pool-based triathlon competitors were seeded on estimated swim time and set off in waves throughout the morning. With the quickest estimated swim time out of just over 500 people, I was allocated a place in the final wave at 11:40. Traveling with my coach Rodger and another fellow Racepace athlete I arrived in plenty of time to register, set up my bike and gear in transition and check the entry and exit points to be sure I’d be able to navigate straight to my designated racking place. Having been over to Ormskirk a month previously for a team recce I was confident I knew the bike course well including the junctions I’d have to negotiate. There was enough time to support some of the other Racepace athletes before warming up and assembling on poolside for the race briefing. Being a pool triathlon I didn’t get the opportunity to wear my Arena Wetsuit, but my Cobra goggles were in action.

I had a clear aim for the swim which was to be fast but controlled, so as to exit the water feeling good and composed, rather than pushing harder during the swim to gain a few seconds but starting the bike with a build-up of fatigued. I followed the plan and posted the quickest swim split of the day and after a slick transition and a flying mount, I was away on the bike. The three-lap course meant a few athletes from earlier waves to contend with but I again had a remit – this time it was to ride smooth and controlled. With several junctions to negotiate each lap, it would be easy to put down some big bursts of power to get back up to speed after each but I remained focused on the task and maintained constant power and intensity as best I could. Before long I was back into T2 and putting on my trainers ready for the run. Phil Ellison had posted a rapid bike split and very nearly caught me up so was in the transition area at the same time – I was ready for a race!

The plan for the run was to execute my fastest possible 5km which I knew meant I had to control myself in the early stages to avoid running at a faster pace than I could maintain. I thought this may give Phil a bit of a carrot to chase me down and was ready to respond if he caught me up, but I ran a well-paced run and pushed hard all the way to the line to win the race in 52:05, just over a minute ahead of Phil who finished in 2nd place.

It was great to be part of such a successful day for the Racepace team with 1st and 3rd female athletes (Sarah Jepson and Samantha Sugden respectively) and Rob Cassidy and Wendy Drake also posting good early-season results. Next up for me is the standard distance race at Stockton Duathlon Festival in a fortnight’s time and I can’t wait to race again!

Special thanks to Pete Jepson for once again using his mechanical knowledge to ensure my bike was in top shape. I’m also grateful to Mark Egan and Egan Associates who are generously sponsoring me for the 2018 season to help me along my journey, as well as to Arena UK and Solo Sports for their support this year. Roll on the next!” 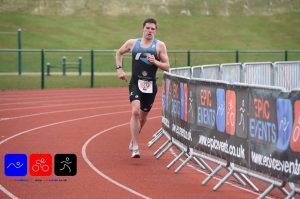